When I first arrived on the Shark Conservation Project, I was a little skeptical about the connection between mangroves and the survival of the shark population; however after taking part in the eye-opening environmental workshop the link was made clear.

Mangroves are carbon sinks, better carbon stores per square km than rainforests, the storage of carbon helps prevent the increasing effect of global warming. As the earth’s temperature increases, so does the ocean temperature, when this happens quickly corals can’t adapt to the changing conditions and consequently die. Many prey species for sharks live around these coral structures, so without them the shark’s food supply reduces. Mangroves also provide perfect nurseries for juvenile sharks to live in until they are strong enough to survive in the open ocean. Around Fiji there are known shark nurseries in large rivers like the Rewa and Navua, these are both surrounded by mangroves. But there are also shark nurseries which have not yet discovered so it is important to conserve all mangrove environments to ensure these nurseries aren’t unknowingly destroyed.

After being inspired by the workshop, it was not hard to get stuck into working in the onsite mangrove nursery at Projects Abroad, which is the largest in the South Pacific. My first experience in the mangrove nursery was planting propagules. Recycled plastic bottles are cut in half and used as plant pots, this is a small thing which helps prevent plastic entering the ocean. The team of 8 I was a part of worked like a machine and we planted the majority of the propagules we had in one morning. The job was swiftly finished by other volunteers in the afternoon. 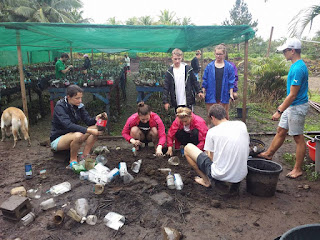 As a result of the hard work, the propagule store needed to be replenished, so when out on the beach cleanup that week, it wasn’t just plastic we were picking up but also propagules that had been washed up onto the beach. We left the beach with 2 full sacks ready to be planted. 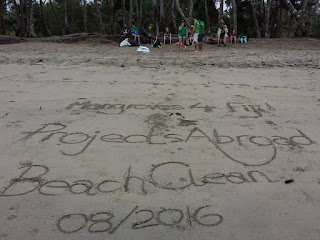 However it’s not just planting in the nursery that needs to occur to conserve the mangroves, once they have grown to a substantial size and have started growing leaves they can be harvested and planted in the community. We were given a target of 1100 propagules to harvest and tie into bundles of 10. This seemed like an unachievable target in one afternoon; however it was quickly reached by the group of tireless volunteers. These propagules were then taken to a local village and planted, hopefully in a few years they will still be growing into adult mangrove trees. 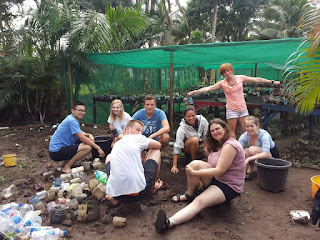 In order to give the propagules the best chance of survival in the nursery, they need to be regularly weeded and watered. Weeding was surprisingly therapeutic and by the end of the session there wasn’t a weed in sight, so hopefully soon these propagules will have matured enough so they too can be harvested and planted in the community.

I have grown to love working in the mangrove nursery, it is hard not to feel a sense of achievement when we plant all the propagules, or when you see them growing successfully. Projects Abroad are hoping to extend the nursery on sight, and the one at the local resort Uprising in order to try and make the resort carbon neutral. I am proud to be part of the work towards a bigger, healthier mangrove habitat in Fiji.
Posted by Unknown at 15:14