It was Monday afternoon at the beginning of lunch when I saw the volunteers troop in from the Mangroves; dirty, sweaty and exhausted. Panic struck me when I started to realized how hard maintaining the nursery must be. It was 1.55pm when I prepared myself for an absolutely draining activity and slowly made my way down to the nursery. How wrong was I! Although two and a half hours seemed like 24 hours of laborious weeding – the activity itself was quite enjoyable, especially with the people we were working with. 2016 chart music was blasted from the boys’ phones and the weirdest and most wonderful conversations took place. Either way we all ended up in hysterics. 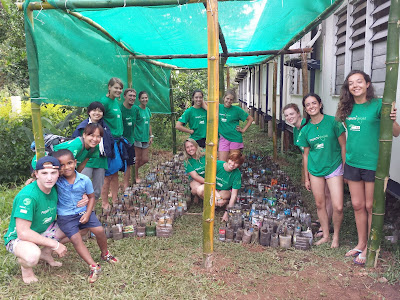 Even though I hadn’t been scheduled into the environment workshop yet, seeing as there was an obvious equal divide on the project focused on diving and mangroves it didn’t take much time for anyone to realize that Mangroves had a massive impact on the conservation of sharks. This was slightly embarrassing seeing how quite a big majority of the world’s population think they know all about protecting marine life – they really didn’t!

My next activity involving mangroves was collecting propagules (mangrove seeds) and rubbish on the beach in Sulu’s and our Projects Abroad t-shirts which did bring a huge sense of pride knowing we were helping out the community. Our work was definitely greatly appreciated by the locals as we walked up the beach while they happily beamed out “Bula! Vinaka!” In this heat the job at first was quite hard at first since I couldn’t identify the propagules; after getting really excited that I finally found one but then realizing it was dead was a massive let down. After an hour or so on the beach I was extremely happy with my big black bag breaking from the weight of propagules I had picked up. We then trekked into the humid forest towered over by multiple types of trees, being me; the first thing that clouded my mind was spiders. A standard phobia but after hearing stories about how big they are here it caused me to be a lot more alert. 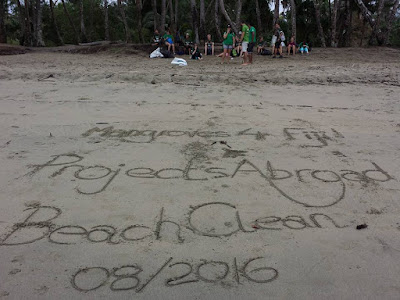 We hopped over barbed wire and pushed through bushes finding piles and piles of propagules, it got to the point where phobias had fled my mind and my main worry was if my bag was going to break as I started having trouble carrying the hundreds of seeds. It was fascinating watching our leader, a local Fijian, rip through the bushes and trees with a machete. I’ve never seen this before and I’m so used to the lazy 1st world countries using electricity to do everything for them. During the collection I saw fully grown mangroves, in the flesh you realise the structure, strength and rigidity of them and it then made perfect sense as to how they protect the village and marine life against natural disasters.

My most recent activity involving the mangroves was a full day of weeding by the whole team; volunteers and staff. We all put 110% effort in to make sure the nursery was weed-free and all the mangroves were happy and healthy. It was brilliant to see everyone enjoying themselves although the heat was powerful the music was booming and sun was shining. After a very satisfied feeling of ripping the weeds from the soil and getting covered in head to toe with mud the nursery was in a great condition, knowing that the mangroves would be a home for juvenile marines species or protect a village from potential natural disasters. 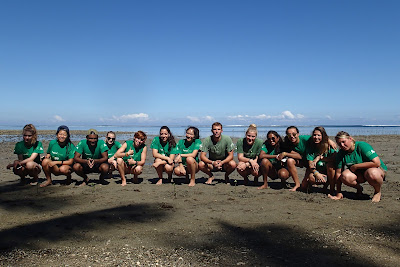