Mangroves for Fiji from a volunteers perspective

The Mangrove for Fiji project, run by Projects Abroad in correlation with the shark conservation project, is a very big and important part of conservation of our oceans creatures. Mangroves create a home and shelter for a big part of the oceans juvenile creatures, and the constant decrease in mangrove forests on a global scale is a problem for us all.

The Mangroves for Fiji project has three main steps; collecting propagules, planting the propagules in a protected garden area, where they can be monitored and nurtured to increase survival rate and the last step planting them in the wild.

A typical mangrove day on the project will start at 9 am. As a group, we will attack the garden. Each person will be given a specific job, which is decided by our staff. There is a number of specific jobs; cutting plastic bottles, filling plastic bottles with nutritious dirt, digging and providing nutritious dirt, placing bottles in/on the ground in squares of one hundred, planting the mangroves in the bottle and watering the plants.

On days where we are in need of propagules, we will as a group go to either a village or a specific beach; here we spent up to 3 hours collecting propagules, and if the collecting is in a village, we will help the local nursery.

Every 2-3 months we will plant the now grown mangroves in the wild. This process is simple; we will go to all our nurseries, where mangroves that show enough maturity will be collected, and brought to a specific location and then planted with one meter distance from each other.

Although mangrove work is not the most popular amongst the volunteers because it is hard work and takes time, many volunteers have described it with the following sentence; “it’s like taking a very long run, it’s tough and it takes time, but the result in the end is visible and a fantastic feeling, especially planting them in the wild”.

I personally have enjoyed seeing the mangrove project expand, especially in the last 2 months. Seeing thousands of plants standing in blocks of hundreds, and knowing that you actually did something to make that happen, is an awesome feeling. Is hard work and some mornings you really don’t want to be in the garden, but the result is something very special.

This week the volunteer team achieved a lot. We not only collected ~3500 propagules from Navua river, but also replaced all the dead propagules in Vunibau village nursery with new live ones and planted an additional 1100, planted 900 propagules in the Ventura nursery, and finally repaired and cleaned up the nursery in Pacific Harbour’s Multi Cultural School and planted an additional 500 propagules there; a successful day all round!!! We now have approximately 10,000 mangrove propagules growing in our nursery areas and this could cover 1 hectare in the wild.

Until next week when we will make even more progress, 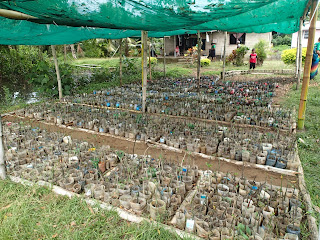 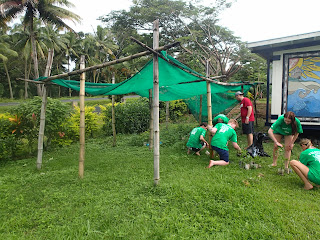 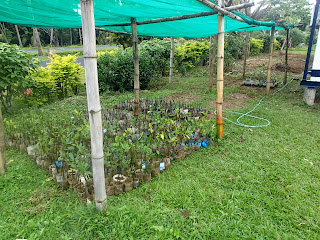 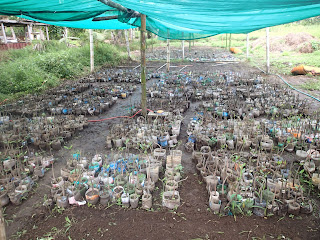 Above; Ventura Apartment Nursery
Posted by Unknown at 19:06