‘Mangrove Monday’ the words that bring terror into the minds of the Projects Abroad volunteers, guaranteed to leave you sweaty faced, sunburnt, reeking of the smell of rotting organic matter, and absolutely exhausted. But it’s also the most rewarding day of the week, you can really see the impact of the work you are doing. Whether it’s wading through waist deep water and rotting soil to find that one extra propagule, erecting new nurseries in the local villages or floating down the rivers masses of work gets achieved. In my 4 weeks in Fiji I’ve so collected hundreds of Propagules, built a nursery, planted and replanted our nursery and de-weeded an extortionate amount of bottle pots.

In the last Mangrove Monday we were sent to the local village Vunibau whose nursery was tragically destroyed by cyclone Winston. Our task for the day was to rip down the remaining flimsy structure and assemble a new bigger stronger nursery. It was in a sorry state, dead propagules scattered everywhere in a mix with our repurposed half-bottle-pots. 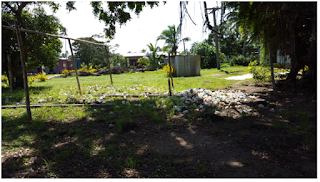 We first emptied all the bottle pots and moved them out of the area, ridded the ground of the weeds of which were covering what was going to be our construction site then vaguely flattened the ground and pulled down the remaining rickety structure. We hatched a plan of the new structure, and with the help of a few villagers the boys proceeded to hack up bamboo to equal lengths and dig the new deeper foundations for the bamboo poles to be firmly placed into.  The girls were giving the laborious task of filling the now empty bottle pots with fresh soil and new living propagules. 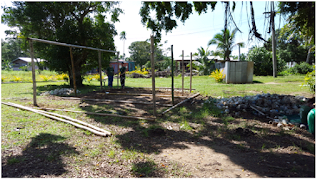 In a short period of time great feet’s had been made with the building work and we had transformed a rickety structure into the beginnings of a Herculean monument. As all structural engineers know the best building material available to man is the trusty zip-tie, capable of holding huge weights this was chosen to be the main component in making sure the nursery would have a much greater chance of surviving the next cyclone! 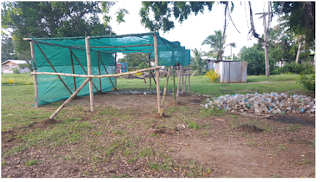 After the new structure was raised and secured, we started to cover the roof and north facing side in perforated netting which would protect the new mangrove propagules from the sizzling Fiji sun. This required a fair bit of balancing, as one volunteer wasn’t tall enough to reach over the upper poles. I being the lightest was thrown onto the shoulders of the tallest in order to zip tie the netting to the bamboo.

As the day was coming to a close and motivation was falling, we had some reinforcements… The local children were coming home from school! The girls had been filling the pots at an incredible pace and we soon had over 800 propagules planted! The children, a tad confused and very excited to see what had been built in their village ran out to start putting the now perfectly filled bottle pots with the new propagules into the nursery. Darting in and out they helped us to place the bottle pots into 10 by 10 squares, until the 800 were in place. 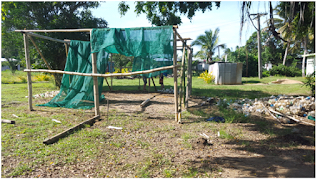 It’s incredible to see what can be achieved when we git our teeth and work together. I loved to see the kids so enthusiastic about their new nursery, as its them who will be growing up in the new Fiji which if is going to prosper needs the help of the mangroves to protect against the Cyclones, and over fishing which is occurring in there waters.

Every few weeks we have to restock our mangrove propagule supply. This is either via walking up the rivers and beaches, plucking them from the trees, or the best wading through the stink and collecting them from the water and mud. We collect about 8 bags a time which last us about a week, and is vital for the continuation of the planting around our nurseries and the ones in the villages and schools around us. We also try to collect as many bottles as possible from the beaches on the clean ups to repurpose into the bottle pots. We try and get as many of the locals involved in the clean ups to show them firsthand the damage that the plastic’s do to the environment (it’s also nice to have a few extra hands here and there!).

Work in our Nursery

At our very own Ventura apartments we have our very own, very large nursery which has managed to pump out over 66,000 healthy developed mangrove propagules set with a root system and leaves into the wild. We have a near factory system of planting -> weeding -> return to the wild. This is very effective. We have a doubled layered nursery to maximise our production, which is kept in check by our mangrove enthusiast Chris.

We spend a lot of time making the half-bottle-pots which we’ve collected from our beach clean ups and local businesses such as Uprising who saves all there plastic’s for us. Having the local businesses support on these matters in vital in the protection of the mangroves in the area. The most time consuming and back breaking is the weeding, the fresh, moist, perfectly sun lit soil which is perfect for growing mangroves is unfortunately perfect for all the weeds and grasses. So we remove these competitors as quickly as possible from their environment to give the mangroves the greatest chance of survival.

Teaching in the Schools

Every few weeks we go to some of the local schools to teach them about the importance of mangroves and how they are crucial to the survival of huge amounts aquatic life which the Fijians need for both as a source of food and tourism. This in my opinion is the most important work we do. For this project to work we need the support of the people who live here as they are they maintain the safety and growth of mangroves. It’s hard for a child to comprehend the long term effects of destroying the mangroves which we try and illiterate in an interesting way. Cut down a mangrove tree -> No home for birds, fish, insects, sharks -> Predation on the young species increases as there is less space to hide, populations of the juvenile fish and sharks decreases -> therefore less fish make it into their seas -> less food, fewer divers -> prices of fish go up due to less supply and greater imports + fewer divers leads to less money for the towns, villages and city’s which they come to visit -> then fewer jobs and on and on… And that’s just a few reasons why mangroves are massively important. And teaching the children who will grow up to be the divers, fisherman, politicians of Fiji it’s nice to think they may think back and consider the impacts of things they do on the environment.