We’ve been really busy with the Mangroves this last couple of weeks and our nursery has grown too. We started filling more and more recycled plastic bottles with soil ready to plant new Mangrove Propagules. The recycled plastic bottles have been collected and donated to the project by members of the local communities and villages.
Once our new pots were filled and ready we needed to head out and find new Propagules to the plant in them. The Propagules are shaped in such a way that allows them to fall from the branches of the Mangrove and travel straight down to the bed of the river where they embed themselves in the sand and mud at the bottom. Here they grow as a new plant and eventually their stem and leaves can be seen above the water level. If the water is too deep, the Propagule can float and drift with the current for up to one year. It will most likely be washed up onto a beach or shallower water and can change its buoyancy to fall to the river bed once more. 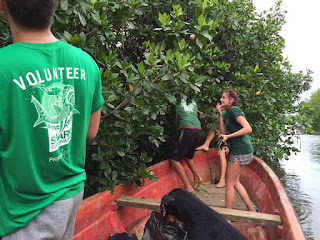 A few of us were split into two groups and each group went out with a local on a boat to collects lots of propagules. One of the locals dogs, Rusty, decided to join us on this journey and swam to the middle of the river were we were to join us on the boat. Once we reached the mangroves we were all ready to get to work and start collecting the propagules. To be honest it was the most fun and rewarding day, simply because we as a team had so much fun hanging off the boat and helping each other trying to reach the ones far and high up in the branches and it was rewarding because we collected three big bags of propagules.
The most humble experience was the day when we went out to do community work in a village by a school.  I think it’s amazing when we learn something new and interesting and go to share it with the kids in the village. So the day before we prepared presentations in three groups, about mangroves, their current status and uses; in construction, fishing and as firewood. Their threats; from deforestation and water pollution as well as how we can help to protect them. We encouraged the kids to collect plastic bottles and bring them to our nurseries. So that they could be a part of the project too. 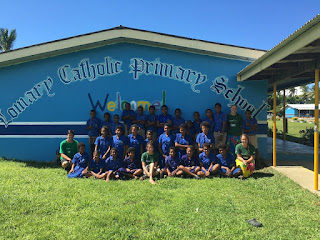 We made posters which included all of the information so when we were finished we could pin them up on the classroom wall so the kids could look at them and remember us from Projects Abroad and what we taught them. When we arrived at the school it was the most amazing feeling ever. Every single one of them had a huge smile on their face and they were just so happy to see us. We started to introduce ourselves and told them what part of the world we came from after that we started our presentation. It was incredible to see how passionate they were about learning and how engaged they were in what we were saying. We as a group made it even more fun by getting them involved, sending a propagule around the class which they had to introduce themselves and had to tell us what they wanted to become when they all grow up. Fiji should be proud that the local village kids have so much ambition and big dreams to change the world into a better and amazing place. Some examples were Teachers, Nurses, Soldiers, a Pilot, a president and so much more. We got them involved by drawing different kinds of species they thought were living in the mangroves. It was so much fun helping them and especially seeing them helping each other. We were impressed with the artistic skills. With pretty accurate drawings of crabs and birds and reptiles and, in particular, sharks. Some of the class went even further in the creativity and drew a whole Mangrove scene with all the animals on the picture and the root structure and branches too.

Tomorrow, on the 21 March, its World Planting Day. We at Projects Abroad are getting involved by planting mangroves the whole day.  We’re ready to put long hours and hard work into this day and it’s an amazing feeling to know that were making a change, starting with Pacific Harbour and in a few years the whole of Fiji and hopefully all around the world. Our nursery here at the Projects Abroad house is the largest Mangrove nursery on the whole of Fiji. We also have another nursery at the Beqa Adventure Dive shop. Their company wanted to become completely carbon neutral and the Mangrove nursery allows them to achieve this. The local hotel (Uprising) also has plans to become carbon neutral and work to build a new nursery will start their very soon.